Someone sent me a picture of a group of bedraggled looking rooikoppies today, asking whether they were mine and I had a chuckle and suggested mine were infinitely the worse for wear. But that’s not true. In fact I have three of the most attractive flame-haired young people around (four if you count Michael’s startlingly rusty beard.) In fact when they were younger my step-children called us the ‘Orangies.’

Andrew says I can no longer lay claim to being a strawberry tart however because I have faded with age. He is probably right because I have noticed an unpleasant tendency among folks apologising to me just before launching into blonde jokes. He recently suggested I dye my hair the colour I think it still is, so sadly my days of auburn glory are nearly over.

But why is it that redheads are either depicted as bog-Irish orphans or harpies? And why do you never see two redheads falling in love on the big screen? It’s prejudice I tell you.

There are so many myths about coppertops, the worst of which is the one about redheads having horrible tempers.  Seriously? Well you spend your life being made fun of because you look different and see how that improves your mood?! You can be sure that every redhead has been called ‘Ranga’, ‘Duracell,’ ‘Ginger’ ‘Orphan Annie’, ‘Carrots’ or ‘Flame’ more than once and none of those were meant kindly.  Speaking for myself, I know that the old flight or fight choice happens with this sort of bullying and you either slink away bruised or … you fight. And I know how I survived… Very soon the jeers were about my ‘smart mouth’ or ‘cheek’ and more than one neighbourhood boy had the hurled insults returned with sods of red clay. Sometimes that didn’t work and I ended up in a scrap or two, earning the nickname by the doctor’s daughter of ‘die bloedige meisie’ and she wasn’t referencing my hair.

You’d think that wannabe mean kids would be more creative, but it is hard to compare the magnificence of gleaming titian locks to anything besides perhaps a glorious sunset. Glowing coals come close too because few redheads are monochromatic, but whatever makes the jeerer feel she must pick on the ‘different’ kid stops her from choosing majestic imagery. And the redhead feels the pain of being the butt of mockery so she either develops a thick skin or is painfully shy.

In high school I was desperate to be one of the crowd and would have given anything to be mousey brown or blonde (God is laughing somewhere now). Being bookish didn’t help either and I spent 20 years trying to stop smoking which in adolescence I figured would help me be less of a wallflower. Of course I was never the shrinking violet wallflower so my unpopularity with boys probably had more to do with my acerbic tongue than my hair colour.

We are all so over being told we are witches though, or that we have no souls or that we are genetic freaks – we know – we are freaking awesome! (See what I mean by not being a shrinking violet?) There are times that I rather like revealing bits of my inner witch too – cue evil laughter.

I grew up also being told that I had to be careful of what colour I wore so as not to appear tarty. So while my older sister with her luxuriant brunette locks was decked out in reds and vibrant colours, I was given the washed out pastels, or ‘lovely warm, Autumn colours’ (browns and beiges) unless of course they were hand-me-downs, in which case it seems poverty deemed it acceptable for me to risk propriety and splash out. Now of course I gleefully step out in every colour I please, especially purples, reds and outlandish cerise outfits. Of course these may look better now that I am not a flaming ‘Oros Head,’ but who is checking.

It was only in my twenties that I grew to enjoy my burnished mane (even though it was the eighties and I permed the hell out of it.) My mother bemoaned the fact that I would bleach the colour out of it with ‘all those chemicals,’ yet I secretly hoped I would, because the fear of being the oddly coloured freckly one persisted.

It took forty years to meet a man who likes my Celtic looks, but before then I had already seen in my eldest son and two daughters how interesting it is to have such divergent looks. They have also alternatively developed sassy rejoinders and strong personalites. Sadly I could not prevent the ‘ranga’ jokes from hurting, but each has owned the power of red, even Sean, who is rapidly losing what strawberry he has left (Sorry, Lad, you inherited your maternal grandfather’s hairline.)

Now the boys have these manly lumberjack red beards and we can only wait to see what happens to the fuzz on Liam’s face.

In the meantime, let’s just pause and ponder the fact that some really cool characters in books and movies are redheads and I’m not speaking about the Weasleys or Nancy Drew: 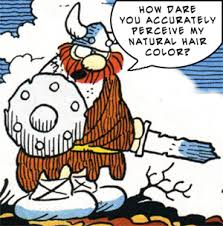 One thought on “On Being a Redhead”