St Martha is the patron saint of drudgery. Well officially, she is the paragon of servants and cooks, but really that boils down (did you catch the cookery pun?) to housework, and by the evils of continuing patriarchy, that falls on mothers. I wonder whether the much put-upon St Martha (whom I absolutely respect btw) also had kids who staged protests worthy of the most vitriolic of trade unionists when it came to being asked to do their bit for the family well-being.

They made ‘em tough in biblical times though. Did you ever notice that Peter’s poor mother-in-law immediately began to ‘wait on them’ after she had been healed by Jesus. No rest and recuperation for her: just straight back into the servitude. You’d have thought Peter would have helped out his wife’s dear mother and finished the evening meal for her, or at least washed up the gourds and stuff!

Today’s kids have it easy too: no walking to the Parklands Well to fetch water, or having to plait a broom before sweeping, or pluck an annoying pigeon for the pot: all they have to do is walk a few steps and switch on a machine of some kind. Andrew, bless his naïve soul, bought a dishwasher a couple of years back, intending to stop the squabbling after supper over whose turn it was to wash up…well we all know how that turned out…

There seems to be this belief somehow that if they argue with me that it is not their turn, I shall magically be convinced to make some other poor inmate suffer a fate which they do not deserve. Clearly they don’t know their parent very well. Debating the instruction, no matter how deeply philosophical/ patronisingly rational (Sean), dramatic (Shannon), ironic (Mika), vociferous (Michael) or loud (Liam) the plea is, the diatribe is akin to suggesting you won the fight while still coming to on the floor of the ring. And yet they keep trying.

And I feel as though I have gone a round or two with a heavyweight boxer (without the cash prize) by the end of it all. Or a paper target after the snipers have had practice. Or Cleopatra’s messenger, the one who was unfortunate enough to bring the bad news while there was an asp around.

I think perhaps I am not cruel enough, although they will tell you that they are desperately in need of emancipation from my yoke of oppression. When I ask for a doggy patrol you’d think there was a meadow of cow pats to harvest (okay so Maggie is frighteningly and prolifically regular), but really is it my fault that you decided to put on your pyjamas at 3pm?! Everyone salivates over the home baked goodies, but no one believes they should clean up afterwards. And transport dirty plates? ‘Pffft! We’re not afraid of goggas in our rooms!’ Until they hear scurrying…then who do they call?

Please don’t bombard me with emails, brandishing successful strategies or tales of your perfect offspring, dear reader. I am not strong enough to handle the envy. My children just like to complain. To be fair, housework in our clan is rather daunting, because meals are somewhat like canteen servings and the attendant mess is proportionately off-putting. But at least they only have a turn every now and then. But therein lies the catch: sometimes the sneaky ones* plan their engagements fortuitously so that they are out when that little duty comes around. And then the outrage of the unfortunate Cinderella without a social life is doubled.

And I am to blame naturally.

Sibling sparring is as old as St Martha and Mary. I appreciate Martha’s objections (we won’t discuss why Laz wasn’t asked to chip in) and I get Jesus’ wisdom, but thank goodness my children haven’t thought to use the ‘I’m praying’ excuse. No hang on, ‘Aunty Anne is here to take me to early mass.’ was a favourite excuse a while back.

Aargh! I’m off to the Mugg and Bean. 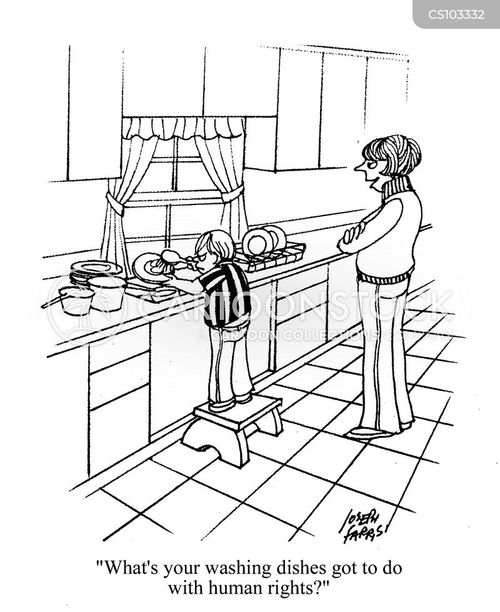